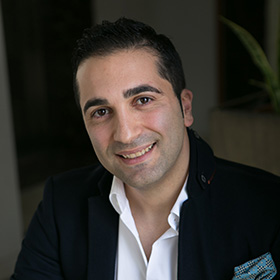 A perfectionist at heart and natural born leader, Armen has been fuelled by a passion for hard work and success for as long as he can remember. From a young age, many described him as the perfect salesman. Others say his strength of character, energy and charm made him really stand out, as he fine-tuned his people skills while working as a waiter in the hotel industry in the USA and Cyprus, alongside studies in Marketing at the University of Indianapolis.

Following two years in PR and Quality Control in a five-star hotel, Armen joined VRC in 2005.
He now enjoys the position of Managing Director since 2013, having worked his way up the career ladder from his initial role as Sales Manager, facilitated by his excellent communication skills, attention to detail, and unwavering drive. And although he takes it all in his stride, describing the moment he joined VRC as a “coincidence” as his CV landed in the hands of the previous director, every day presents great challenges and interconnected opportunities.

A real visionary, Armen has helped VRC grow from strength to strength, ensuring the company always remains at the top of its league. To this end, he spends much of his time closely following market trends, travelling the world, and exploring new meat markets, while overseeing the daily activities of the VRC team and ensuring that the demands of each and every customer are fully catered to. And when he does have a little spare time, it’s his family that that take pride of place, with his love for football coming in second!

You can find out more about which cookies we are using or switch them off in settings.

This website uses cookies so that we can provide you with the best user experience possible. Cookie information is stored in your browser and performs functions such as recognising you when you return to our website and helping our team to understand which sections of the website you find most interesting and useful.

Strictly Necessary Cookie should be enabled at all times so that we can save your preferences for cookie settings.

If you disable this cookie, we will not be able to save your preferences. This means that every time you visit this website you will need to enable or disable cookies again.

This website uses Google Analytics to collect anonymous information such as the number of visitors to the site, and the most popular pages.

Please enable Strictly Necessary Cookies first so that we can save your preferences!

To view more details about our product Sign up or Login